Thanksgiving, US Presidential Election and Ascension 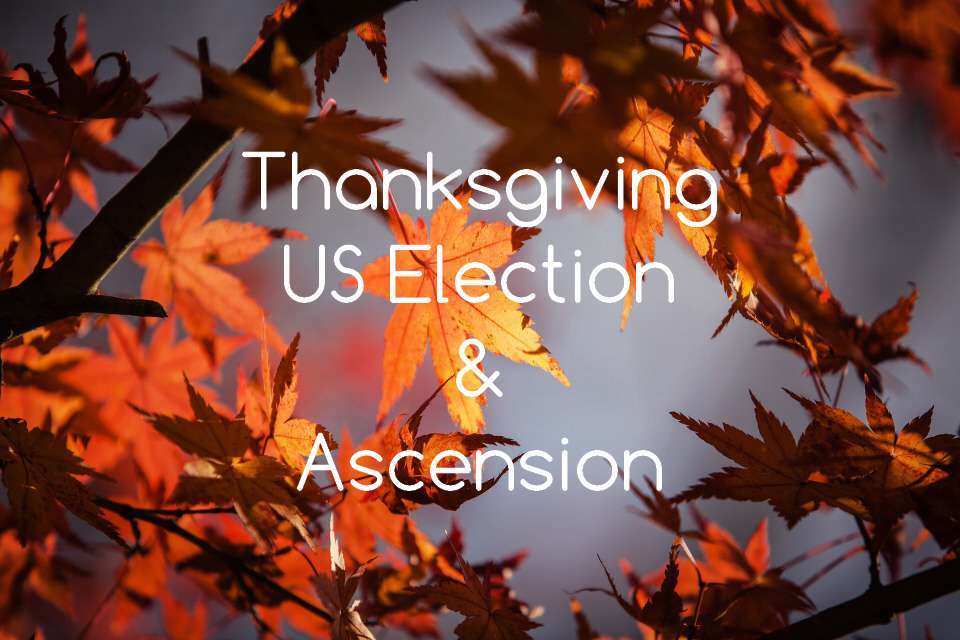 As I write this, tomorrow is Thanksgiving in the USA and we are almost at the end of a most tumultuous year.

The Brexit vote in the UK and the recent US Presidential election have brought to the surface so many core issues that need to be healed on a personal and global level.

Social media has been flooded with posts attacking the opposition on both sides of the debate and interestingly both Brexit and Trump supporters have been labelled racist even though there were many more significant factors involved in choosing how to vote. To me, the overall message from both Brexit and the US election is that people are tired of the status quo and want REAL change.

For those of us who are focused on our conscious evolution, we can play a very significant part in helping people awaken to the higher purpose of these events by teaching and demonstrating how to remain calm and centered even in the midst of turmoil.

The key strategy for attaining higher consciousness is by applying the Power of Neutrality.

[bctt tweet=”Everything in the Universe is neutral until we assign our interpretation and give meaning to it.” username=”jan_moore”]

How often have you experienced something that seems really bad at the time but turns out to have been the greatest catalyst for positive change? When we suspend judgment about an individual event or situation and allow its role in the bigger picture to unfold without attachment to the outcome, we support the manifestation of the divine plan for ourselves and for the greater good.

[bctt tweet=”We only suffer when we resist what is.” username=”jan_moore”]

We can choose whether to look for the positive aspects of the US election process (awakening, questioning the status quo, revealing the flaws & corruption in the system) or drown in the negativity of judgment, division and despair. What you resist persists and you manifest what you focus on. Instead of getting bogged down in the problem, you can use your power of intention and inspired action to create the world you want to live in.

Let us encourage people to step back and discern truth from propaganda. Many people who supported Hillary Clinton in the US or voted to stay in the EU in the UK are hating the outcome of the vote, but hating it is not going to change the result. Hating the people who voted for the victor is just perpetuating division. There is a much bigger picture unfolding here. It is time to choose love and reconciliation and to work together to create the world we want, not try to destroy the opposition.

There was a huge marketing machine at work in both campaigns to try to engineer an outcome which was not for the benefit of the majority. It is imperative that we dig deeper before making judgments and condemn people based on the misinformation of the mainstream media. We must seek out the truth and question everything.

I’m a big fan of the I Ching and do a daily oracle reading which I’ve recently started posting on Facebook. Here are some words of wisdom that have been particularly pertinent to current global affairs.

“It is essential now to quietly accept the way that things are. This does not necessarily mean that you endorse or celebrate current circumstances, just that you do not resist them. Acceptance is the most fundamental principle in the philosophy of the I Ching. To resist events is similar to resisting the turning of the earth – you only exhaust yourself in vain.”

“The simple truth is that every moment in every person’s life contains the teaching he or she most needs at the time. It is not always immediately apparent why a thing is happening because the Sage is often inclined to work in a roundabout fashion. Nonetheless, whatever is happening now is what must happen. Our only task is to trust the process and allow the lesson to seep in.” Last Saturday I was interviewed on Nancy Hopkins’ show on Wolf Spirit Radio and we talked about the election and how we can overcome the negativity to create positive change.

I believe that the current political scene is playing a huge part in the ascension process. We are being given the opportunity to choose how we respond to these challenging times – consciously or with our egos.

If you’re interested in exploring the higher purpose of the election, Matt Kahn shares how the election is anchoring the Divine Feminine as part of the ascension process – a very interesting perspective on the candidates and what they represent.

You know, ascension was never going to be easy. It has to be earned. You can’t get to 5D with 3D vibrations generated by the negative, fear-based reactions of the ego (which include hate, anger, aggression, conflict, judgment, cruelty etc.).

[bctt tweet=”#Ascension was never going to be easy. It has to be earned. You can’t get to 5D with 3D vibrations generated by the negative, fear-based reactions of the ego.” username=”jan_moore”]

You don’t develop 5D consciousness by living in a bed of roses, you develop it by maintaining love consciousness in the midst of the deepest darkest challenges that shake you to the core of your being.

When you choose to respond with higher consciousness to situations and events you are choosing ascension and, by example, helping others to ascend too.

This Thanksgiving I want to give thanks for the powerful lessons that these events are providing and for the fact that, despite some of the outward signs, we are moving towards a new paradigm of love, joy, peace and abundance.

P.S. If you are struggling with core issues being triggered by current events, or just feel they are holding you back from fulfilling your potential, schedule a complementary Success Strategy Session here.