EMF and WiFi – How to Protect Yourself From the Invisible Killers What are EMF and WiFi and why are they harmful?

“From power lines in your home to cell towers of powers vastly exceeding what is required, these forms of radiation are quite simply “Death Rays”.” ~ Nancy L Hopkins, www.cosmicreality.net.

The findings, which chronicle an unprecedented number of rodents subjected to a lifetime of electromagnetic radiation, present some of the strongest evidence to date that such exposure is associated with the formation of rare cancers in at least two cell types in the brains and hearts of rats, reports Scientific American”

With the rapidly increasing number of artificial sources of electromagnetic fields, it needs research of their effects on living organisms. The most common object of these studies is primarily a human who is exposed to electromagnetic radiation in the environment, at home and at workplaces. In this area are also observed the changes in behavior of animals and plants caused by the high-frequency electromagnetic radiation. Plants are very sensitive because they can perceive a lot of perceptions from the environment. In this article, we observed the effects of WiFi radiation on the growth of plants, namely garden cress. One sample was exposed to long-term electromagnetic radiation in the vicinity of a WiFi router. The second sample was exposed minimum to that radiation. It has been shown that long-term exposure of WiFi radiation in the vicinity of the cress causes changes in growth and development as well as visible changes of discoloration and vitality.

According to this article in Waking Times, INDUSTRY WHISTLEBLOWER CLAIMS THIS IS WHAT’S REALLY KILLING HONEYBEES:

“In an interview with Miles Johnston, Gabe revealed that he used to work in the mobile or cell phone industry in Britain and was trained to understand frequencies and bandwidth. As part of his job, he used to carry around a backpack containing all sorts of devices of varying frequencies. Not surprisingly, being so close to so much artificial EMF and RF (radio frequencies) affected his mood, health, behavior and entire life. He later quit his job. What makes this story so interesting is that Gabe was telepathically contacted by the bees, or the bee consciousness, with a crucial message. (Animal communicators such as Anna Breytenbach are able to contact the collective consciousness of other species, which speaks to them in one voice).

The bees haven’t merely communicated with Gabe; they have actively tried to make him understand, and make him experience, exactly what they are going through. This has led him to get headaches, feel disoriented, lose his train of thought and suffer a host of other unpleasant effects. It appears as though the bees, through Gabe, are desperately shouting out to mankind: stop creating artificial EMFs that interfere and jam our frequencies – you’re killing us!”

These are just a few examples of the mounting evidence that EMF and WiFi radiation is harmful not only to our health but to the health of the planet.

How To Protect Yourself from Deadly Sources of Radiation

You are being continually bombarded with radiation from electrical devices, WiFi networks, cell phones, SMART meters… and the list goes on.

Research into Shungite has shown that it has many healing and cleansing properties, one of which is to protect against EMF and WiFi radiation.

So what is Shungite?

Shungite is a mineral with the same basic CHEMICAL composition as coal. Shungite, however, is constructed with a very large molecule nicknamed the Bucky Ball or Fullerene.  So, unlike coal, Shungite does not burn, is not affected by pressure and is of a greater hardness.

“Shungite is the planet’s gift. It is planetary-celestial alchemy… After a while, this planet has created alchemy known as Shungite. And Shungite is the representation of every crystal that has ever been experienced by every being living on this world past, present and future, so it is every crystal put into one. Just as we are having our awakening, the crystal and mineral community is also having their own awakening. Their process is just happening before our frequency of time is coming into existence. That is why there is a manifestation of Shungite in general. It is there for the people to use. But even the mount of Shungite that isn’t used, it is still doing its mineral community purpose, which is ascending those beings who are becoming Shungite beings…and Shungite is a sample encoding of infinite energy into a finite object….” – Andrew Bartzis, Galactic Historian, August 1, 2016

Where is it found?

Shungite is found in the Zazhoginsky Shungite deposits in the Russian Republic of Karelia near the eastern border of Finland. The mineral was called Shungite after the village Shunga. The Russians have known of the beneficial properties of Shungite for many years. It was used to build a good portion of Saint Petersburg by Russian Czar Peter the Great. He had come to know of the material because it was where he had built a healing spa for his soldiers. The waters that flowed through the deposit were known to have healing properties.

The Russians began to use Shungite in the production of cast iron, for coating blast furnaces, for producing sand for water purification systems, and for building material to shield against electromagnetic radiation. It is now being used in paints, concrete, brick, and finishing solutions.

“The electromagnetic (EMF) shielding qualities of building material made from Shungite is being used “not only in health care facilities, nursing homes, rest homes but also in enterprises electronic, radio, nuclear industry, communication centers, residential buildings, built on tectonic faults near high-voltage lines. In fact, a new class of building materials to protect the public from electromagnetic radiation without metal screens.”

Nancy L. Hopkins, author of the book Cosmic Reality, has made it her mission to educate the world on the properties and benefits of Shungite and to make it available in many forms through her non-profit organization Cosmic Reality Shungite. Nancy and her team are continually researching and developing affordable new applications for Shungite and producing devices that protect against the damaging effects of EMF and WiFi radiation.

Personally, I have used Shungite products ever since I discovered Nancy and her mission in 2013. I first used it by putting an S4 Sticker on my WiFi router and immediately noticed that the atmosphere in my home felt calmer. I use it for purifying and activating water by placing just 3 Shungite nuggets in my glass. 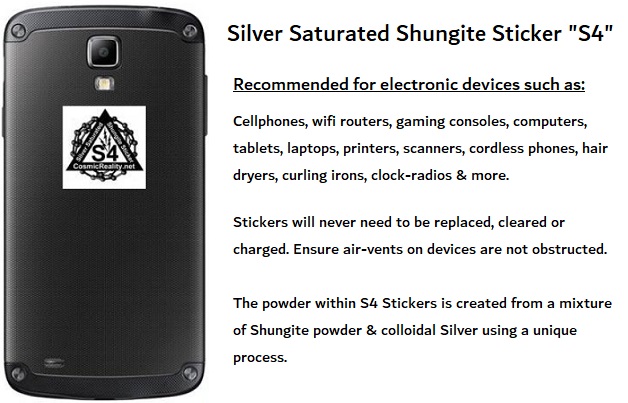 When my little Jack Russell was attacked by a pack of dogs and nearly killed in 2013, one of her wounds had to have 9 layers of stitches and the vet said to expect repeated reinfection of the wound because of the bacteria and matter introduced by the bite. Sure enough, this wound kept getting inflamed and weeping until I attached a Shungite nugget to her collar. After that, the wound healed completely.

There is a wealth of information at http://www.CosmicReality.net where you can also find the Shungite Store and purchase a wide variety of Shungite products. There is also a very informative book by Regina Martino entitled Shungite – Protection, Healing and Detoxification, which includes images of the effect of Shungite on the energy body.

Please share this information with your friends and family and on social media to raise awareness of the deadly effects of EMF and WiFi radiation and how Shungite can protect against it.